When is trout season in California? April 27 of 2019 is the day when the California trout season kicked off. Local government hatcheries made adequate preparations in the weeks leading up to the occasion. Anglers can look forward to more than 95,000 pounds of the fish amassing a population exceeding 170,000. That said, here’s what else trout enthusiasts can expect for the season that is to come.

When is Trout Season in California?

In truth, you can fish across a number of lakes, rivers and other water bodies throughout the area during the rest of the year as well. During the in-season, the red tape is off for highly coveted locations in Eastern Sierra which bring together many from within and beyond the most populous state in the US. Fishing can be a great team building activity to get the team out of the office.

What Areas are Limited? 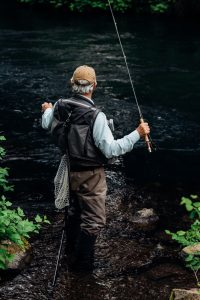 Ice and heavy snow have rendered some waters impassable and these areas will remain no go zones. The CDFW (California Department of Fish and Wildlife) has flagged down certain lakes which have turned into hostile fishing grounds unfavorable for human occupation. The conditions should let up sometime in early July enabling anglers to go fishing.

A Daily Limit of Five

The general rule of thumb across streams, rivers, and lakes presently stands at no more than five trout per day with a regulated possession of 10. For anyone above the age of 16, a state fishing license is a prerequisite for any fishing activity within California. Just like many other policies on gear specifications, bag sizes, and size requirements, rules differ from one area to another particularly on closing and opening days. Anglers are therefore advised to check with local authorities to familiarize with exact policies of the specific area.

Back to our question of the day: when is trout season in California? Well, the date for the official unveiling was 27th April 2019. The season began on the last Saturday of the said month and spans all the way to November of the same year. However, this is peak season, and you can fish for trout throughout the year. That has always been the case year after year and it doesn’t look like changing anytime soon.